The chaotic election we have just been through reminded me of another topic that is seemingly unconnected – Ezekiel’s War of Gog and Magog. I want to repost part of an article I wrote in 2015 about the war of Gog against Israel.

Recent events in world politics have encouraged me to re-post previous articles on the Ezekiel 38/ 39 prophesy. Moves by radical Islamic forces in the Mid East are setting the stage for events described in the Psalm 83 wars which I believe will trigger the Gog/Magog war against Israel. Ezekiel begins his prophesy with the statement –

“And I will turn thee back, and put hooks into thy jaws, and I will bring thee forth …“– Ezekiel 38:4

and this suggests Gog is involved in other activities when he is forced to move into the Mid East. Many Bible scholars have identified Gog with Russia, even before Russia ever became a political power. If this is true, and I believe it is, Russia’s current move into Crimea, Yugoslavia, and other Baltic states could signal the setting for Ezekiel’s prophesy beginning. Russia’s threatening Denmark with nuclear retaliation, Iran’s threatening to wipe Israel off the map, ISIS’ threats against Jordan and Saudi Arabia are all setting the scene for Israel making a preemptive strike on Lebanon, Syria, and/or Iran. Jordan, Saudi Arabia, and Egypt may even support such an Israeli attack. This could very well force Russia to honor its commitments to Syria and Iran by attacking Israel. Also, with a weak, indecisive American administration in place for at least another 1-2 years, Russia may believe this is the best time for such an attack.

We know that the radical Islamic nation of Iran has had as it’s goal the destruction of Israel and under the Obama Administration, Iran made great strides in it’s preparation for this war. But, President Trump greatly set them back by backing the U.S. out of Obama’s nuclear Iranian deal and by defeating ISIS. However, now that Biden has stolen the  Presidency, Iran is again rejoicing. They are attacking American troops in Iraq once again and threatening the soon destruction of Israel. And they are restarting their nuclear program. Meanwhile, Israel is watching the developments very closely and made the following statement by a Likud Minister  –

“In one of the most forceful statements made by an Israeli official, the Likud’s Tzachi Hanegbi, considered an ally of Prime Minister Benjamin Netanyahu, threatened that Israel could attack Iran’s nuclear program if the United States rejoined the nuclear deal, as US President-elect Joe Biden has indicated he plans to do.” 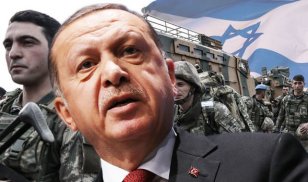 Another major player in the Gog-Magog war is the nation of Turkey. Turkey was once a friend of the United States but under it’s new leader Erdogan, they have moved to open hostility towards the west and Israel and friendship with Russia. In a recent meeting of the OIC (Organization of Islamic Cooperation), the topic of forming an Army of Islam to defeat Israel was discussed.

At the conference, Tanriverdi (Erdogan’s chief military advisor) delivered a speech detailing the inner workings of the “Islamic Confederal State” that ASSAM aims to establish with 61 Muslim countries. In his address, Tanriverdi said that a “rapid deployment force” should be created. Judging by an article Tanriverdi penned in 2009, the purpose of this joint Islamic force is to defeat Israel, which “should be made to get engaged [in war] and the length of the war should be extended.”

The planning for an invasion of Israel by these Islamic nations is apparently far along. The fact that this conference of OIC (Organization of Islamic Cooperation) nations was headed by Erdogan of Turkey does not mean Russia will not be leading the invasion. Russia has all the advanced weaponry and logistical support that will be needed and do not forget that Russia is very Islamic in its own makeup.

Now if Israel should be provoked to attack Syria or Iran’s nuclear plants, would this bring Russia down to their aid? And what would the United States do? It is no secret that Joe Biden is a puppet of Obama and has no love for Israel. I think it is very likely that he would sit back and watch the development instead of going to Israel’s aid. And it would end up with God going to Israel’s aid, just as Ezekiel writes.

“I will call for a sword against Gog throughout all My mountains,” says the Lord GOD. “Every man’s sword will be against his brother. And I will bring him to judgment with pestilence and bloodshed; I will rain down on him, on his troops, and on the many peoples who are with him, flooding rain, great hailstones, fire, and brimstone. Thus I will magnify Myself and sanctify Myself, and I will be known in the eyes of many nations. Then they shall know that I am the LORD.” – Ezek. 38:21-23

Perhaps there is a reason why God allowed Trump to lose our election, so His plan could come to pass. It does not mean Trump will not be given another four years – it may just be delayed?

So what are these recent events? For one; the recent events in Afghanistan have not only strengthened terrorism around the world but they have given new life to ISIS, which along with Iran’s support will once again raise it’s ugly head in the Mideast. Two; the Biden administration is once again attempting to restart the nuclear agreement with Iran. It has invited several European nations to once again join in the negotiations. Except this time, Iran’s negotiating position is greatly enhanced since it has enormous influence with the Taliban who hold American hostages! Third; America has for the first time turned it’s back on helping Israel. I will include a recent Mideast Breaking News from Amir Tsarfati to explain the facts –

Key issues: 1. House Democrats deny Israel help with the Iron Dome missile defense system that it promised by removing any aid for Israel (our strongest ally) from the new budget! 2. The United States removed it’s Patriot Missile Defense system from Saudi Arabia at a time when they are under attack from Iran and its surrogates. 3. Afghanistan’s Bagram Airforce base, which we abandoned now has Chinese teams inspecting our equipment and working a deal with the Taliban to take over the base. Biden’s pullout from Afghanistan will have far reaching effects and his blaming President Trump for the plan is cowardly and untrue.

My estimation on Russia at present is that they are mainly concerned with limiting the possible increase of terrorism out of Afghanistan for the present. Of course they also want their share of any “trade” from Afghanistan and Pakistan after the American withdrawal and they relish the removal of US forces from that part the region. Ezekiel says God says to Gog, “I will put hooks in your jaws and bring you down” which seems to me that Russia is perhaps occupied with another goal rather than Israel at the time, perhaps Ukraine or other former Soviet satellites. If I am correct, that means something else happens to redirect Russia’s attention. Perhaps events described in the Psalm 83 wars or perhaps the destruction of Damascus as described in Isaiah 17:1.

In any event, we are much closer to this war than we were at the beginning of this year. One other note – it is clear that the Obama influenced Democrat Party now in control of America and the Biden Administration is moving away from support of Israel, which is likely the reason America is not mentioned in Ezekiel’s account of this war.