Our young people are being attacked by demonic forces with the doctrine of Humanism, the Woke culture and the Cancel culture. The educational establishment has portrayed the republican model of government as repressive and glamorized socialism. The teachings of Christianity are eliminated and replaced with the tenants of Marxism. While this has been going on, the Church has been asleep and Christian parents have blindly surrendered their children into the clutches of government run education. A government system that began by buying public school compliance with grants and incentives. Once their hooks are set, they gradually set curriculum standards that were against Biblical standards. All this happened right under the Church’s nose, so to speak. After two or three generations of this kind of indoctrination, these student became the future leaders of the country and now they are passing laws that reflect their humanistic teaching. And now we have such laws as the For the People Act of 2021, otherwise known as HR1, and the Equality Act, otherwise known as HR5. This bill would  add “sexual orientation” and “gender identity” as protected classes under federal civil rights law. Which would have multitudes of negative effects, especially on Christians.

The ‘older generations’ are to blame for letting these things happen. We were asleep and too concerned with making money and we did not seek God for help and direction. And we allowed our churches to give us pastors that were more interested in building big churches and money than they were in the truth. But, it is not too late to seek the LORD, and He has an answer. It is called Revival! God knew these conditions would be prevalent in the last days and He has an answer for them –

“Behold, I will send you Elijah the prophet Before the coming of the great and dreadful day of the LORD. And he will turn The hearts of the fathers to the children, And the hearts of the children to their fathers, Lest I come and strike the earth with a curse.” – Mal. 4:5, 6

Elijah will turn the hearts of the fathers back to the children – how? He will remind them to remember the 10 Commandments that used to be taught in America’s public schools –

“Remember the Law of Moses, My servant, Which I commanded him in Horeb for all Israel, With the statutes and judgments.” – Mal. 4:4

These commandments embody the ‘general principles of Christianity’ that John Adams, our 2nd. President, referred to.

God told the fathers “Only take heed to yourself, and diligently keep yourself, lest you forget the things your eyes have seen, and lest they depart from your heart all the days of your life. And teach them to your children and your grandchildren,” – (Deut. 4:9). As the fathers do this, God will turn the hearts of the children to the fathers.

God cares for the youth of every generation, in fact nearly every move of God has begun with the youth. King David, Jeremiah, King Josiah, John Calvin, Martin Luther, George Whitefield, Jonathan Edwards, D.L. Moody, and Evan Roberts of the Welch revival were all young men when God used them to start revivals. In our day, the Jesus People Movement began with the youth. God has promised the outpoured Holy Spirit to the young –

“And it shall come to pass afterward That I will pour out My Spirit on all flesh; Your sons and your daughters shall prophesy, Your old men shall dream dreams  Your young men shall see visions.” – Joel 2:28

Most of the disciples Jesus chose were young and were among those who received the Holy Spirit when He came on Pentecost. I think God often chooses the young because the older generation has become too set in it’s ways and they have substituted man’s traditions for the life-giving word of the Holy Spirit. Jesus referred to this in His parable about new wine skins.

Now ‘old wine skins’ can be used but, they have to be soaked in water for a time, which refers to the Word of God, and go through a massaging process with oil to soften the skins and make them pliable again and most old skins have grown too comfortable to endure this process!

The Holy Spirit will be poured out again in the Latter Rain and many young people will be recipients. We should encourage them and make room for them, even if they act differently form us old wine skins! One evidence of this outpouring is already occurring in China, a nation of much persecution.

“According to a recent estimate, more than half of China’s one billion population are under 20! China is a nation of young people, so it is not surprising that the house churches have a preponderance of people in their 20’s and 30’s. Some of them are ex-Red Guards.“1

Some sources estimate over 72,000 people a day are being converted in Red China! All across the world there are indications of a significant move of the Holy Spirit in our generation. Revivals are breaking out in Tennessee, and they are beginning in California as well. 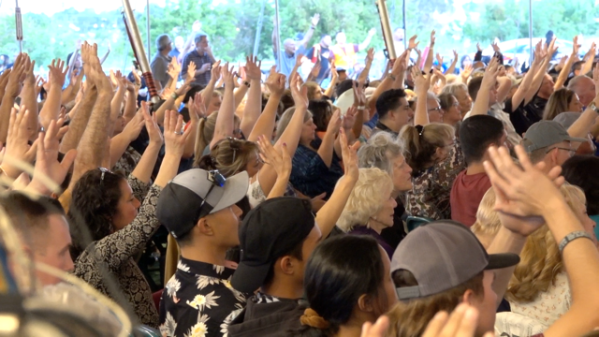 “Ask the LORD for rain In the time of the latter rain. The LORD will make flashing clouds; He will give them showers of rain, Grass in the field for everyone.” – Zech. 10:1

Don’t forget our heritage from the Lord – our children!

“Behold, children are a heritage from the LORD, The fruit of the womb is a reward. Like arrows in the hand of a warrior, So are the children of one’s youth. Happy is the man who has his quiver full of them; They shall not be ashamed, But shall speak with their enemies in the gate.” – Psalm 127:3-5

They will be like arrows in the hands of the prayer warriors and they will stand in the gate and confound the enemies of this age in the Name of the LORD! Pray for them and equip them to rise up in Jesus’ Name.