Friends, we are in deep trouble in the United States as well as other countries. We have left our covenant relationship with the God of the Bible. The Pilgrims and the Puritans, our original founders believed in a covenant with God.

“The Puritans saw Israel in the OT as a pattern for their social covenant with God. Like Israel, they believed that if they, as a people, kept their part of the covenant, which was to walk uprightly and make His name known, they would be blessed. If, on the other hand, they lost their sense of purpose and began to live selfish and sinful lives, they would suffer God’s wrath because of their rejection of the covenant. During the voyage to New England, Winthrop warned,

‘Now if the Lord shall please to bear us, and bring us in peace to the place we desire, then hath He verified this Covenant and sealed our commission . . . but if we fail to perform the terms of the Covenant, we shall perish out the land we are crossing the sea to possess.’

This sense of social responsibility to God is the reason the Puritans tended to hold one another accountable. They pointed out that since communities and nations cannot be rewarded in the next world, they must necessarily be rewarded in this one, according to their deeds. The sin of one or a few could, therefore, bring down God’s judgment on the entire community. This is also the reason that laws were passed outlawing adultery, fornication, profanity, drunkenness and Sabbath breaking.”

END_OF_DOCUMENT_TOKEN_TO_BE_REPLACED

The world today is in turmoil and confusion. The winds of war are sweeping the Middle East; violence and plagues of locusts are sweeping Africa; the winds of financial ruin are sweeping Europe; the winds of tolerance and political correctness are sweeping America, England, and Australia; and the little tornadoes of greed, sexual immorality, religious heresy,  and pride randomly reap their havoc wherever they will. One thing is certain, there is no peace. Politicians promise hope and change but they are incapable of producing it and their plans only produce more havoc and slavery to the people they represent. END_OF_DOCUMENT_TOKEN_TO_BE_REPLACED

Christians need to speak out on the issues facing us.

We are facing a war, a war of ideas and the outcome will be life changing for all of us. I do not elect to remain silent, even though many will think this war is too political and Christians should be only concerned with the spiritual and confined inside the four walls of their churches. That however, was not the attitude of early preachers. During the revolution well over 50% of sermons were political and they clearly showed the effect of the spiritual on the political. It has been a trick of the devil to mussel preachers of the Gospel by telling them to not endorse a political candidate or speak on controversial topics. So here goes! The Bible states – END_OF_DOCUMENT_TOKEN_TO_BE_REPLACED

The reports out of Europe about their immigration problems are startling. Germany has opened her door to Muslims and now they are plagued with crime and women being raped. England has suffered the same fate and rather than crack down on Islamic hatred in their countries they curtail Christian witness because they fear the Islamic backlash.

King David of Israel faced the same pressures from his Arab neighbors (who were the ancestors of Islam) and he wrote about it in Psalm 2.

“Why do the heathen rage, and the people imagine a vain thing? The kings of the earth set themselves, and the rulers take counsel together, against the LORD, and against his anointed, saying, Let us break their bands asunder, and cast away their cords from us.” – Psalm 2:1-3 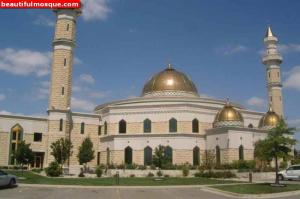 There are more ways than war to take over a country and immigration and a high birth rate are just as effective, even if a little longer. Immigration without assimilation into the culture is as dangerous as war. The United State is beginning to learn this lesson as California is becoming an extension of Mexico. But, the more dangerous situation is from Islamic immigration. Dearborn Michigan is now almost totally under the Islamic influence. Most of its Christian churches are now closed. While Christians are tolerant of Islam, Islam is not tolerant of Christianity or Judaism. They are tolerant while in a minority but once they are in the majority the story changes. 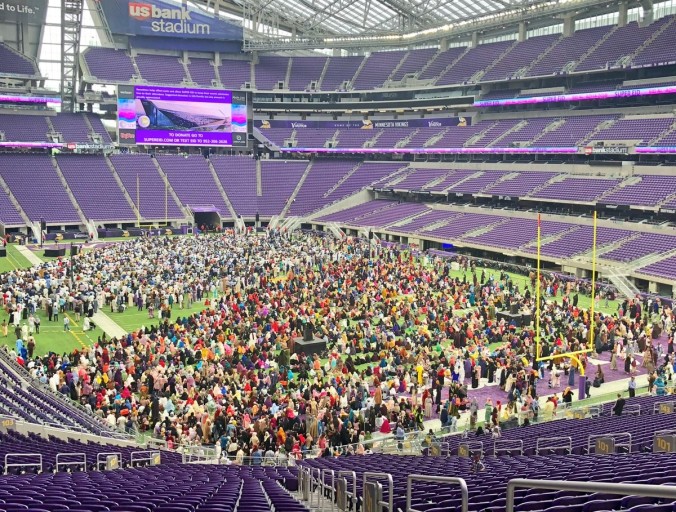 Minnesota is fast learning this lesson as they have elected Islamic Officials who want to be sworn in on the Koran instead of the Bible. They recently had an Islamic gathering in Minneapolis where the chants Allahu Akkbar were heard. Wisconsin is also feeling the effect of Muslim influence as Ripon College, in Ripon WI, ordered a poster of a conservative student group which was a memorial to terrorist attacks against us to be removed because it offended Islamic students. The poster is shown below –

School children are taught Muslim prayers and pray to Allah in various schools but they dare not mention the name of Jesus! And the 10 Commandments are outlawed. The Supreme Court has ruled that Humanism is a religion and the majority of public schools are steeped in humanistic philosophy. It seems that every religion but Christianity is allowed! And we, the American public are duped into paying for it while our children are taught anti-Christian philosophies. It is only a matter of time before Christian witness will be outlawed in the U.S. as well as in England.

I suggest that Christian parents withdraw their children from public school indoctrination and home school them or place them in private schools that are devoid of humanistic philosophy. At the very least, Christian parents aught to be involved in monitoring the public schools their children attend: attend the board meetings and teacher conferences, examine the school books being used, and monitor the teachers. They won’t like it but, it is your right and responsibility.

“Know ye therefore that they which are of faith, the same are the children of Abraham.” – Gal. 3:7

We are called children of Abraham in the New Testament but few wonder why God chose and blessed Abraham. It was because God knew He could trust Abraham with children born to him –

“For I know him, that he will command his children and his household after him, and they shall keep the way of the LORD, to do justice and judgment; that the LORD may bring upon Abraham that which he hath spoken of him.” – Gen. 18:19

Can God trust you with your children?

All it takes for evil to triumph is for “good men” to do nothing! This is a paraphrased edition of an old saying. But, it is certainly true yet today. When it comes to violent Islamic extremism the “good” Muslims are strangely silent! Meanwhile, so-called Islamic extremist are growing in number and influence. The Bible teaches that if a tree never brings forth good fruit, the ax should be applied to the root.

“And even now the ax is laid to the root of the trees. Therefore every tree which does not bear good fruit is cut down and thrown into the fire. – Matthew 3:10

Yet, instead of these actions, we have our leaders claiming Islam is a religion of peace and shifting the blame to the United States for our so-called weaknesses. (See article in American Thinker). The Political Correctness doctrine used by most American higher education, news media, and government has blinded us to what is really happening. The evidence points to the conclusion that Islam has not been taken over by radical extremist but is itself the problem. END_OF_DOCUMENT_TOKEN_TO_BE_REPLACED 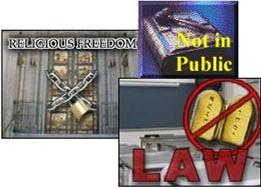 “From verbal harassment to hanging, persecution for professing faith in Christ is as old as Christianity itself, often co-mingling with ethnic violence and geo-political conflict. In the 20th century, Christians in formerly Communist countries went underground with their faith, eventually gaining support and advocacy from missionary Brother Andrew and his Open Doors USA. Today the nonprofit compiles an annual list of the world’s worst persecutors of Christians; Muslim countries with stringent Shari’ah law comprise 8 of the top 10 worst.” Christianity Today

Persecution of Christians is on the rise in the United States as well. While it is not yet as violent as it is in Muslim dominated countries, it is on the rise.