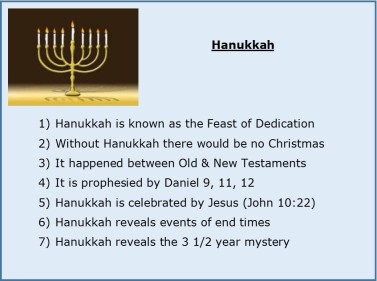 Around 200 B.C., Judea—also known as the Land of Israel—came under the control of Antiochus III, the Seleucid king of Syria, who allowed the Jews who lived there to continue practicing their religion. However, his son, Antiochus IV Epiphanes, proved less benevolent: Ancient sources recount that he outlawed the Jewish religion and ordered the Jews to worship Greek gods. In 168 B.C., his soldiers descended upon Jerusalem, massacring thousands of people and desecrating the city’s holy Second Temple by erecting an altar to Zeus and sacrificing pigs within its sacred walls. (This act is referred to by Daniel and Jesus as the Abomination of desolation). The acts done by Antiochus are a partial fulfillment of Daniel’s prophesies. END_OF_DOCUMENT_TOKEN_TO_BE_REPLACED