Just before Jesus and His disciples celebrated the last Passover, the one in which He instituted the Lord’s Supper, He gave them His teaching on the end of the age. He told them to expect wars and rumors of wars, and rebellions, earthquakes in many places, famines and pestilences, and great signs in the heavens, and great persecutions of Christians. Then He told them Jerusalem would be desolated and “trampled by Gentiles until the times of the Gentiles are fulfilled.” END_OF_DOCUMENT_TOKEN_TO_BE_REPLACED 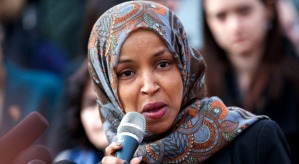 Sen. Ted Cruz (R-TX) quickly pointed out that she failed to identify herself as an U.S. citizen. He said, “More than a little odd that ‘American’ doesn’t make the list. Wonder why? She is a sitting member of the US Congress. But, in today’s Leftist world of intersectionality, ‘American’ is deemed embarrassing & gauche,’. But what is more interesting to me is she failed mention that she is a follower of the God of the Bible. But, I don’t want to just single her out, the Congress is filled with nearly 100 socialists and communists, and they don’t believe in any god. How can this be? It can only happen because the people are blindly following the Democrat Party which has been taken over by leftists and socialists and they are listening to ABC and CNN who are run by socialists. END_OF_DOCUMENT_TOKEN_TO_BE_REPLACED

“Then I turned to see the voice that spoke with me. And having turned I saw seven golden lampstands, and in the midst of the seven lampstands One like the Son of Man, clothed with a garment down to the feet and girded about the chest with a golden band. His head and hair were white like wool, as white as snow, and His eyes like a flame of fire; His feet were like fine brass, as if refined in a furnace, and His voice as the sound of many waters;” – Rev. 1:12-15