As I was in prayer this Sunday morning, I felt the Lord gave me this verse for our current situation in America.

“The voice of one crying in the wilderness: “Prepare the way of the LORD; Make straight in the desert a highway for our God.” – Isa. 40:3

Does anyone doubt that we are in a ‘wilderness’? A wilderness of lies. One where Christian conservative values are outlawed? One where the Republicans, who claim to support conservative values, fail to oust Rep. Liz Cheney from her Leadership position even after she voted to impeach President Trump? (Cheney is the Chair of the House Republican Conference.) No wonder that abortion is still legal, when all the Democrats and at least half the Republicans are for it! It is as David said in the Psalms.

“For there is no faithfulness in their mouth; Their inward part is destruction; Their throat is an open tomb; They flatter with their tongue. Pronounce them guilty, O God! Let them fall by their own counsels; Cast them out in the multitude of their transgressions, For they have rebelled against You.” – Psalm 5:9, 10

A wilderness where the media plays up Alexandria Ocasio-Cortez’s claim of being threatened with her life by the U.S. Capital rioters on January 6th, laying the blame on President Trump, while the truth is, she was in another building altogether and was not in any danger! The left’s agenda is to overthrow the United States Republic and make it into a Socialist state and they will use any lie to further that agenda! If you doubt this assessment, take a  look at who Joe Biden is appointing to his administration. I could highlight many but, one will do. Biden appointed Jalina Porter as State Department spokesman Ned Price’s deputy despite her entire lack of qualifications. But a look into her past social media posts finds a number of radical posts, at least one of which attacks police in a post filled with lies. 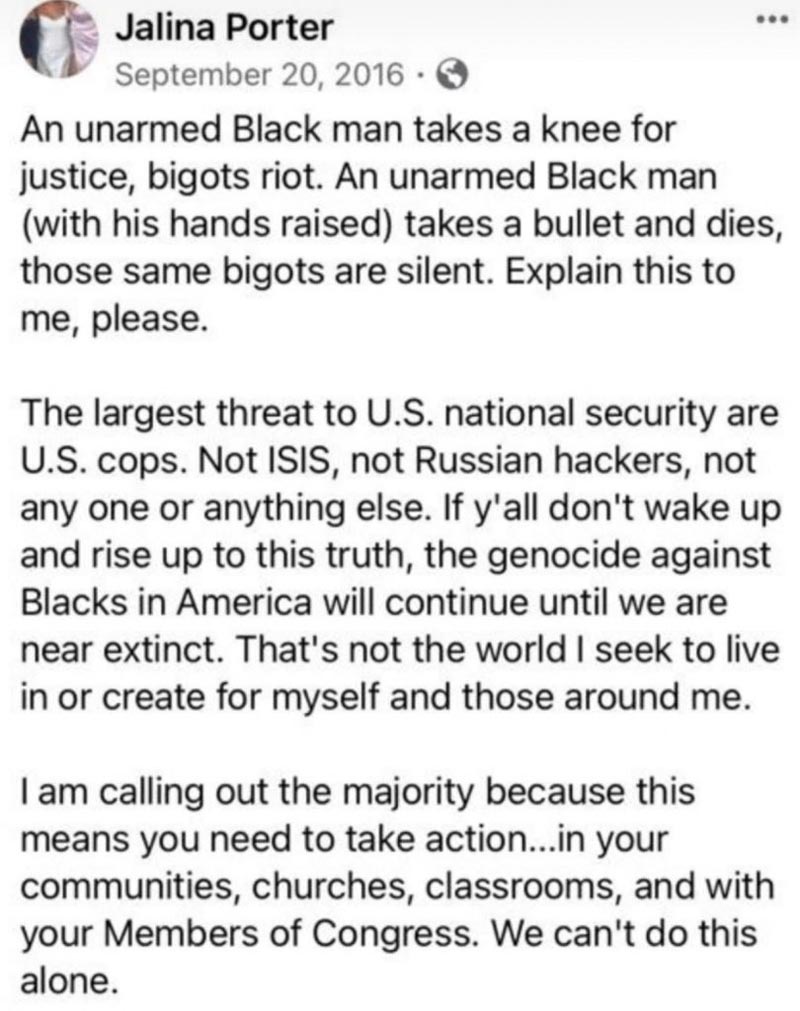 These Democrat Communists need to shut down the police and replace them. They have been using ANTIFA and BLM but now they are continuing to load our government with fellow travelers, just as Obama did. I expect Biden’s next goal will to be weaken the U.S. military. The military is already taking a hard line against Christianity and it began under President Obama’s administration –

“President Obama’s anti-Christian bigotry has now infiltrated all levels of his administration, including the U.S. military where our soldiers are being indoctrinated with a steady diet of anti-Christian hatred. The attacks on Christians are ramping up. Soldiers are being threatened with punishment for donating to any evangelical Christian organizations, which is a flagrant violation of their Constitutional rights.” The Obama administration’s Department of Defense was caught training U.S. troops that Catholics, orthodox Jews, and evangelical Christians are to be considered “religious extremists,” even equating the major religions representing more than half of Americans with truly violent groups such as al-Qaeda, the Ku Klux Klan, and Hamas.

Joe Biden’s immigration policy is designed to further hurt the U.S. economy and U.S. citizens. Joe Biden’s immigration policy will release 12,000 dangerous criminals a month into our communities, according to Trump advisor Stephen Miller. All this is being done right under most American’s eyes as the Alphabet Media (ABC, CBS, CNN, NBC, MSNBC, etc.) turn a blind eye to it. This says nothing of Biden’s plan to destroy 80% of America’s energy production!

Why should we as Christians be concerned with these things, you might ask? First, they are removing God from our society! Second, they are removing freedom from our society, freedoms that Jesus died to give us! Third, they are taking away America’s important position of being a ‘light on the hill’ for the world to see what blessings belief in God can bring. They intend to make America as dark as the darkest parts of the world. But, God has a word for them – He is coming to judge the earth!

“But the cowardly, unbelieving, abominable, murderers, sexually immoral, sorcerers, idolaters, and all liars shall have their part in the lake which burns with fire and brimstone, which is the second death.” – Rev. 21:8

Now, this is the desert we are called to be a voice in. We alone have the Good News that there is a Savior who can save us from our sins and thus avert the coming judgment of God. We alone have the message Jesus commanded us to give – “Repent, for the Kingdom of Heaven is at hand.” We alone can point out the signs of His soon coming – signs in the earth, signs in the heavens, and signs in society.

Will you commit to being “a voice crying in the wilderness”?