Jesus warned of “birth pangs” that would announce His second coming.

“But when you hear of wars and commotions (riots and revaluations), do not be terrified; for these things must come to pass first, but the end will not come immediately.” Then He said to them, “Nation will rise against nation, and kingdom against kingdom. “And there will be great earthquakes in various places, and famines and pestilences; and there will be fearful sights and great signs from heaven.” – Luke 21:9-11

Laying aside all the current political upheavals, wars and rumors of wars, I want to concentrate on the earthquakes, famines, and pestilences now occurring. Watch this revealing video by The Two Preachers which highlights just a few of these things now happening –

There is no doubt about the world-wide increase of major earthquakes as the USGS statistics show.

USGS graph of Major Earthquakes in the Past Century

And these earthquakes also result in tsunamis and flooding and other strange weather patterns. In fact there is an entire zone of earthquakes now active, it is called the Ring of Fire and it encloses the Pacific Ocean. The scientist Dutchsinse has gained renown predicting the next earthquake or related volcano to erupt around this Ring and he is predicting a New Large M7.5 Earthquake with possible Tsunami threat! 2nd this week! But, I think it is curious that it is called the Ring of Fire, as outbreaks of wildfires are breaking out around the globe. Again the Two Preachers have it on video –

“For behold, the day is coming, Burning like an oven, And all the proud, yes, all who do wickedly will be stubble. And the day which is coming shall burn them up,” Says the LORD of hosts, “That will leave them neither root nor branch.” – Mal. 4:1

Unfortunately, judgments such as these often catch the righteous as well as the unrighteous unawares. It is why Jesus warned us to “watch and pray” and why the Apostle Paul warned the Thessalonians –

“But concerning the times and the seasons, brethren, you have no need that I should write to you. For you yourselves know perfectly that the day of the Lord so comes as a thief in the night. For when they say, “Peace and safety!” then sudden destruction comes upon them, as labor pains upon a pregnant woman. And they shall not escape. But you, brethren, are not in darkness, so that this Day should overtake you as a thief. You are all sons of light and sons of the day. We are not of the night nor of darkness. Therefore, let us not sleep, as others do, but let us watch and be sober.” – 1 Thes. 5:1-6

I believe these are the next birth pangs that Jesus predicted, and they are now coming closer together and with more intensity. It is time to seek the Lord like never before. Remember the last warning in the Bible –

In other words, ‘He who is righteous, be more righteous and he who is holy, be more holy’.

Fires have not abated. In the U.S. the National Interagency Fire Center reported –

“Currently 66 large fires and complexes have burned 438,364 acres. Six new large fires were reported, three in California and one each in Idaho, Montana and Wyoming. More than 15,000 wildland fire personnel are assigned to incidents across the country. Six Type 1 incident management teams (IMTs) and 15 Type 2 IMTs are working on large fires in the Northwest, Southern California, Great Basin, and Northern California areas.”

Israel365 News posted an article titled 2021 ON TRACK TO BECOME RECORD-BREAKING YEAR OF MAJOR EARTHQUAKES, VOLCANOES and in it they stated, “

In the first 65 days of this year, 42 major quakes, magnitude 6 or higher, have shaken the planet.” which is a record. But earthquakes are not the only thing to increase – volcanoes as well are on the increase. Europe’s most active volcano, Mount Etna in Sicily, erupted seven times in the past two weeks. A large eruption started at Sangay volcano, Ecuador on Saturday. An earthquake swarm shook Mount Hood, a potentially active stratovolcano near Portland, Oregon for 45 minutes last week, raising concerns that the volcano was beginning to awake. Mount Sinabung in Indonesia’s North Sumatra province began erupting last Tuesday, sending volcanic materials as high as 16,400 feet into the sky with authorities recording 13 times when it released ash clouds. Three weeks ago, Fuego volcano, located 50 kilometers away from the capital city of Guatemala, started to erupt. As of yesterday, 43 volcanoes around were erupting or showing signs of activity.

“and all men who are on the face of the earth shall shake at My presence. The mountains shall be thrown down, the steep places shall fall, and every wall shall fall to the ground.” – Ezek. 38:20

“But the LORD is the true God; He is the living God and the everlasting King. At His wrath the earth will tremble, And the nations will not be able to endure His indignation.” – Jer. 10:10

Earthquakes and volcanoes are clear signs of the approaching end days. Why is God so upset with us? You might ask. The prophet Ezekiel has the answer.

Our nation has done good in the past and we have been righteous before the LORD, but we have turned away from that. In what way you might ask?

“Therefore, I also gave them up to statutes that were not good, and judgments by which they could not live; and I pronounced them unclean because of their ritual gifts, in that they caused all their firstborn to pass through the fire, that I might make them desolate and that they might know that I am the LORD.”’ – Ezek. 20:25-26

In other words, when a nation turns to abortion, which is a ritual in Baal worship, we were pronounced ‘unclean’ by God as a nation. Charisma News wrote this article on the subject – 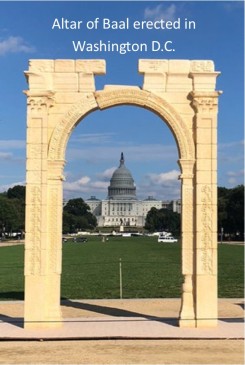 “The reproductions of the 50-foot arch that stood at the Temple of Baal in Palmyra, Syria, that will be erected in New York City and London next month will only be the first of many. As you will see below, it turns out that there are plans to put arches in hundreds more cities all over the globe. The organization behind this is the Institute of Digital Archaeology, which is a joint venture between Harvard University, the University of Oxford and Dubai’s Museum of the Future. The initial arches from the Temple of Baal that will be erected in New York and London as part of UNESCO’s World Heritage Week in April are intended “as a gesture of defiance“, but ultimately the plan is to share this “cultural treasure” with as many cities around the planet as possible.”

One of the chief acts done at the altar of Baal was child sacrifice, which is what abortion is – child sacrifice for the convenience of the parent! So, one might ask, “How is this a cultural treasure?”

Wake up America before it is too late!

My next article will update Things About to Happen – part 3.