America is in a life or death struggle right now and many don’t even realize it! The struggle is between the One World advocates (the Establishment) and God’s plan for a free and independent America. Leading the charge is American media with a constant attack on Donald Trump because he dared to promote ‘Make America great again’! If you don’t believe me just read the following quote –

“In all, people identified in federal campaign finance filings as journalists, reporters, news editors or television news anchors — as well as other donors known to be working in journalism — have combined to give more than $396,000 to the presidential campaigns of Clinton and Trump, according to a Center for Public Integrity analysis.

96% of the media believes in and is pushing the One World agenda. That is why they don’t want Trump’s border wall,  they want a border less, no walls world. Of course, that means no sovereignty as well and is exactly what the Antichrist wants to inherit.

I want to explain where the Bible reveals these truths but, it will take several articles. First we 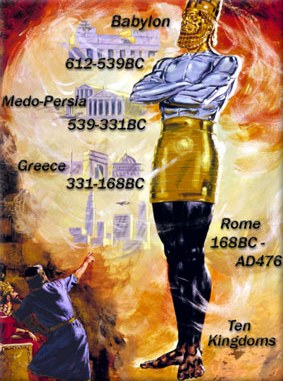 will look at the Book of Daniel, chapter two where we will see the final kingdoms on earth – They proceed from Babylon to Persia to Greece to Rome, all of which are represented by separate metals which represent Satan’s kingdoms (see Rev. 13:1,2).  However, the final 10 toed kingdom is made up of two materials, iron and clay. This symbolizes the iron, which is Rome, mixing with religion. It is I believe The Holy Roman Empire. Many will say the Holy Roman Empire ceased with Napoleon but, it has been making a comeback! The EU has grown to over 50 nations and in 2009, they signed their constitution which was called The Treaty of Lisbon. They are now forming an EU Super Army as they prepare for the weakening of Russia, the U.S., and most of Islam in the war of Gog and Magog.

In Daniel 7:4-9 we are shown 4 nations that will be on the earth at the time when God sets up His kingdom on the earth – they are a lion with eagle’s wings, a bear, a leopard, and a terrible beast with iron teeth that had 10 horns. Out of the horns of this 4th beast came another ‘little horn’ that plucked up 3 of the other horns and in this horn were eyes like the eyes of man, and a mouth speaking great things (blasphemies). In case you are wondering, this is the same beast John saw in Revelation 13 – 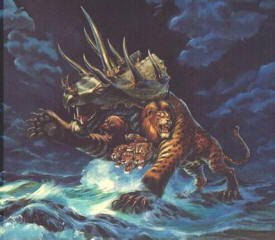 The Beast out of the Sea

“And I stood upon the sand of the sea, and saw a beast rise up out of the sea, having seven heads and ten horns, and upon his horns ten crowns, and upon his heads the name of blasphemy. And the beast which I saw was like unto a leopard, and his feet were as the feet of a bear, and his mouth as the mouth of a lion: and the dragon gave him his power, and his seat, and great authority.” – Rev. 13:1,2

There are however 2 differences: (1) these beasts which were first seen in Daniel 7 are now joined together into one kingdom and (2) the eagles wings are missing. As Daniel was told these beasts represented end-time nations, the question is – who are they? The lion is clearly England and the Bear is known as Russia. The Leopard is Greece and the iron beast with 10 horns is the final Holy Roman Empire. They are joined together in the final Beast Empire shown in Revelation, except what has happened to the eagle?

Here is what I believe. England, Russia, and Greece are joined into a one world empire which is the restoration of the Holy Roman Empire. We are told in Daniel what happens to the Eagle –

“The first was like a lion, and had eagle’s wings: I beheld till the wings thereof were plucked, and it was lifted up from the earth, and made stand upon the feet as a man, and a man’s heart was given to it.” – Dan. 7:4

Daniel foresaw the United States Revolutionary war in which the United States became its own nation to follow God’s plan for it and not Satan’s. In Revelation 12 after Satan is thrown down from heaven to the earth, he and the Antichrist kingdom comes against Israel and Christians but, there is one nation that stands with Israel – the Eagle. (I first wrote about this in The Mystery of the Eagle) 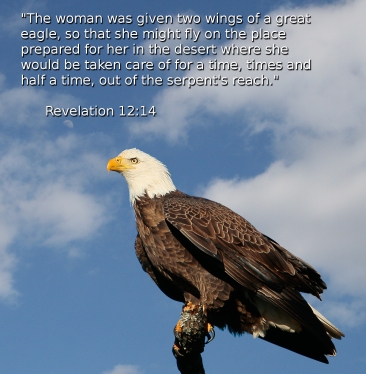 “And to the woman (Israel) were given two wings of a great eagle, that she might fly into the wilderness, into her place, where she is nourished for a time, and times, and half a time, from the face of the serpent.” – Rev. 12:14

To do this, the United States must be strong and committed to its godly heritage and that is why these liberal One World advocates hate Trump so much. He might actually help America return to its true calling – its true greatness – its call in God.

I will write more as the Spirit leads me. I hope you are challenged and encouraged.