Paul wrote about conditions in our day, the last days, and called them ‘perilous’.

“This know also, that in the last days perilous times shall come. For men shall be lovers of their own selves, covetous, boasters, proud, blasphemers, disobedient to parents, unthankful, unholy, Without natural affection, truce-breakers, false accusers, incontinent, fierce, despisers of those that are good, Traitors, heady, high-minded, lovers of pleasures more than lovers of God; Having a form of godliness, but denying the power thereof: from such turn away.“ – 1 Tim. 3:1-5

The word perilous is ‘chalepos’ in Greek and means ‘harsh, fierce, savage‘. When Paul writes ‘perilous times shall come’, he means for the righteous. In other words, if you try to do good, the world will attack you harshly, fiercely, even savagely! That sounds to me like what today’s news media, Democrats, and leftists are doing to President Trump. Whenever he tries to do something good for the country, he is attacked viciously, even

though they have previously supported doing the same thing.

But, he is not the only one. Folks who live in Dodge County, Georgia stand for the national anthem and they take a knee to pray. So when the Dodge County High School cheerleaders started selling t-shirts that read, “In Dodge County, we stand for the flag, kneel for the cross,” nobody thought it would cause a controversy. But, it did! Dodge County School Board member Shirley Ikedionwu posted a scathing message on Facebook calling the shirts “politically divisive.” 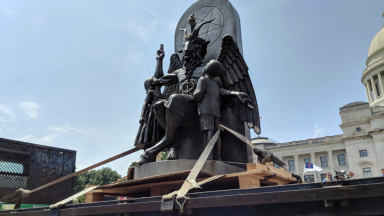 These are just two of the attacks going on against those who call good – good and bad –  bad! Meanwhile, the media covers up stories that matter, such as the terrorist training camp and murder of a young boy in Arizona because of their links to Hillary Clinton and the Democrat Party.

Isaiah prophesied about these days –

“Woe unto them that call evil good, and good evil; that put darkness for light, and light for darkness; that put bitter for sweet, and sweet for bitter!” – Isa. 5:20

Many of today’s colleges are doing just this as they distort the country’s history and lie about the benefits of socialism. If they call themselves Christian, it is certainly as Paul wrote so long ago – they are “high-minded, lovers of pleasures more than lovers of God; Having a form of godliness, but denying the power thereof – from such turn away.”

“You are not restricted by us, but you are restricted by your own affections. Now in return for the same (I speak as to children), you also be open. Do not be unequally yoked together with unbelievers. For what fellowship has righteousness with lawlessness? And what communion has light with darkness? And what accord has Christ with Belial? Or what part has a believer with an unbeliever? And what agreement has the temple of God with idols? For you are the temple of the living God. As God has said:

“I will dwell in them
And walk among them.
I will be their God,
And they shall be My people.”

“Come out from among them
And be separate, says the Lord.
Do not touch what is unclean,
And I will receive you.”

“I will be a Father to you,
And you shall be My sons and daughters,
Says the LORD Almighty.”