I believe 2019 will begin a year of judgment, judgment on the false, on the wicked, and on those not committed to the Lord. The prophet Isaiah said –

“Woe to those who call evil good, and good evil;
Who put darkness for light, and light for darkness;
Who put bitter for sweet, and sweet for bitter!” – Isa. 5:20

First, I accuse the politicians, mainly Democrats, who immediately upon election call for more abortion of the innocent. They are introducing socialism for our Republic. They are promoting homosexual, lesbian, transgender lifestyles in their laws and at the same time opposing biblical based morality. They talk out of both sides of their mouths, calling evil good and good evil. They oppose common sense legislation, that they agreed with under President Obama, just because President Trump proposed it. They give $500 million for a wall in the middle east but not one cent for a wall on our southern border. 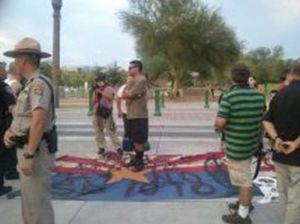 Disrespecting the US Flag

Next, I accuse the people who voted them in. In Wisconsin, Democrat Evers was elected because the big cities with colleges also offered referendums on legalizing pot, knowing this would bring out college young people to vote. Now, he is reversing his pre-election stands. Democrats in other states offered similar free-bees to the electorate. California and other states allowed non-citizens to vote as well. Michigan and Minnesota declared they no longer believed in a Constitutional Republic  by voting in Muslims who would not even sworn in on the Bible but chose to be sworn in on the Koran. In New York the governor vows to open the doors for abortions. But, all these evils, and much more than I have listed, did not go unnoticed. God is keeping track of them all.

Lastly, I accuse the false church which continues spewing its left leaning ideas; saying Jesus is not the only way to heaven, standing against the nation of Israel, blessing abortion centers, supporting the homosexual lifestyle, and discounting the Bible as the word of God. Their leaders not only won’t enter the kingdom of God but, they also block the way for their followers. Jesus has some words for them –

“Therefore by their fruits you will know them. Not everyone who says to Me, ‘Lord, Lord,’ shall enter the kingdom of heaven, but he who does the will of My Father in heaven. Many will say to Me in that day, ‘Lord, Lord, have we not prophesied in Your name, cast out demons in Your name, and done many wonders in Your name?’ And then I will declare to them, ‘I never knew you; depart from Me, you who practice lawlessness!’

You cannot accept Jesus as Lord then live as the world lives. There has to be a change of heart. I pray those in the church that have accepted a ‘greasy grace’ gospel will hear the message given in the following video.

There is little time left and I speak to those who call themselves Christians first – listen to the whole word of God. Come out of the Babylon system before you receive of her judgments. To the rest, I say hear the words of Jesus and repent while you have time – there is not much left! Hear the last message of the Bible –

“He who is unjust, let him be unjust still; he who is filthy, let him be filthy still; he who is righteous, let him be righteous still; he who is holy, let him be holy still. And behold, I am coming quickly, and My reward is with Me, to give to every one according to his work. “I am the Alpha and the Omega, the Beginning and the End, the First and the Last.” Blessed are those who do His commandments, that they may have the right to the tree of life, and may enter through the gates into the city. But outside are dogs and sorcerers and sexually immoral and murderers and idolaters, and whoever loves and practices a lie.” – Rev. 22:11-15