Friends, we are in deep trouble in the United States as well as other countries. We have left our covenant relationship with the God of the Bible. The Pilgrims and the Puritans, our original founders believed in a covenant with God.

“The Puritans saw Israel in the OT as a pattern for their social covenant with God. Like Israel, they believed that if they, as a people, kept their part of the covenant, which was to walk uprightly and make His name known, they would be blessed. If, on the other hand, they lost their sense of purpose and began to live selfish and sinful lives, they would suffer God’s wrath because of their rejection of the covenant. During the voyage to New England, Winthrop warned,

‘Now if the Lord shall please to bear us, and bring us in peace to the place we desire, then hath He verified this Covenant and sealed our commission . . . but if we fail to perform the terms of the Covenant, we shall perish out the land we are crossing the sea to possess.’

This sense of social responsibility to God is the reason the Puritans tended to hold one another accountable. They pointed out that since communities and nations cannot be rewarded in the next world, they must necessarily be rewarded in this one, according to their deeds. The sin of one or a few could, therefore, bring down God’s judgment on the entire community. This is also the reason that laws were passed outlawing adultery, fornication, profanity, drunkenness and Sabbath breaking.”

There is no doubt that God has honored His end of the covenant. In a short 200 years the United States became the most prosperous nation on earth and a superpower as well. But all of that has changed.

In Great Britain, which was once a great Christian nation, over 100,000 citizens have ordered their Debaptism certificates turning to atheism or Islam. 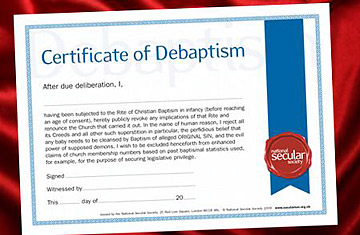 A survey commissioned by the Barna Group indicates what the report calls a “dramatic change” in American Christianity. The Barna Group qualifies a “practicing Christian” by a respondent “calling oneself a Christian, strongly prioritizing faith and regular church attendance.” By these measures, only 25 percent of respondents qualify as practicing, versus 45 percent in 2000. The survey also showed a doubling in the number of American atheists and agnostics, and that an equal number of respondents became non-practicing Christians as those who left the faith completely.

What is even more disturbing is the rapid growth of Islam in America and nations of the west. Part of this rise in Islam is due to President Obama’s efforts to bring in 10’s of thousands of Islamic refugees and the subsequent opening of the Democrat Party to Muslims running for political office. And the Department of Education is pushing hard to indoctrinate our school children in the principles of Islam.

Since the advent of the 2000’s God has been sending “wake up” messages to us – in ‘mass die offs’, violent storms, the rise in earthquakes and volcanoes, plagues, signs in the heavens, terrorist attacks, wars and rumors of wars. Each new event getting stronger than the last. Yet, we don’t seem to turn back from our rebellious attitudes toward God. Now, we are facing the possible mass destruction that will be caused by the Wormwood prophesy of Revelation chapter 8.

It is time to turn back to God in repentance and He has raised prophetic voices calling us to the same action. Jonathan Cahn is calling for just such a return.

In the midst of the COVID19 plague and the possible coming destruction of Wormwood, will you not set aside this date to humble yourself and turn to God Almighty?