The drive to control the people is growing steadily.  I just received news that the Walmart and the Sam’s Club in our area will begin requiring that all people entering MUST wear masks, even though there is no scientific proof that the wearing of masks will protect people from getting the Covid19 virus. There is however plenty of proof that many masks impede the flow of oxygen, causing headaches and more serious results as well. This is nothing but an effort to get the people used to being controlled. The mandatory wearing of masks, maintaining ‘social distancing’, and curtailing of mass gatherings (except when the protests and riots achieve their goals) are all planned moves to gain control over people’s freedoms. Next will be controlled voting, probably ‘voting by mail’ which is easily manipulated by fraud to insure a prescribed outcome. You might want to look at who is pushing mail in voting, then you might want to look at who is pushing the wearing of masks, and then you might want to look at who is pushing strongly for a mandatory vaccine for the Covid19 virus. I think you will find they are liberal ‘One-World Government’ types and they certainly do not believe in the Republic of the United States or in God.

I don’t believe these issues just happen, they are planned and promoted by those who want control over the people. I know I will be called a conspiracy freak by some but, I also know we are living in the end-times, in which the Bible predicts many of these types of actions.

Concerning the soon coming vaccine that will soon be forced upon us all, I want you to listen to what Dr. Carrie Majec has to say –

Now, I want you to read an article I posted several years ago on the Days of Noah that Jesus warned us about – 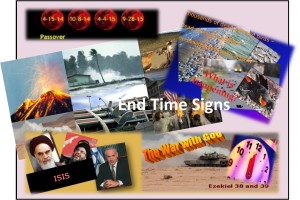 Many end-time signs predicted in the Bible are happening now, from signs in the heavens, bird-fish-beasts mass die offs, political re-alignments, to blooming of the fig tree (Israel). In this article I want to highlight another sign that Jesus warned would also be a harbinger of the end times – the days of Noah.

One thing is very clear, people in Noah’s day were so taken up with everyday living that they had no time for God or His rules. But, hidden in this simple statement is a deeper problem – genetic corruption that produced uncontrolled wickedness among mankind. One has to read the story of Noah in other sources (such as the Book of Enoch and the
Book of Jasher) to see the entire picture.

“Now it came to pass, when men began to multiply on the face of the earth, and daughters were born to them, that the sons of God saw the daughters of men, that they were beautiful; and they took wives for themselves of all whom they chose. And the LORD said, “My Spirit shall not strive with man forever, for he is indeed flesh; yet his days shall be one hundred and twenty years.” There were giants on the earth in those days, and also afterward, when the sons of God came in to the daughters of men and they bore children to them. Those were the mighty men who were of old, men of renown. Then the LORD saw that the wickedness of man was great in the earth, and that every intent of the thoughts of his heart was only evil continually.” – Gen. 6:1-5

Who are these ‘sons of God’? Some believe it is just a phrase for the sons of Adam and Seth, in other words of human origin, but, that does not account for the description of their offspring, which were clearly different – giants who are the mighty men of old. And it does not account for God’s reaction to decide to destroy mankind with a flood.  No, these ‘sons of God’ were fallen angels who left their first assignment in the heavens and came to earth just as Jude describes them –

“And the angels which kept not their first estate, but left their own habitation, he hath reserved in everlasting chains under darkness unto the judgment of the great day.” – Jude 1:6

Jesus, Jude and all the disciples had access to other sources that most today do not – the Book of Enoch and the Book of Jasher.

“And the (fallen) angels taught them charms and spells, and the cutting of roots and made them acquainted with plants. And the women became pregnant, and they had large giants … . The giants consumed all the work and toil of men. And when men could no longer sustain them, the giants turned against them and devoured mankind. And they began to sin against birds, and beasts, and reptiles, and fish, and to devour one another’s flesh, and drank the blood. Then the earth laid accusation against the lawless ones.” – Book of Enoch 7:2-6

“And some of the sons of men caused their wives to drink a mixture that would render them unable to conceive, in order that they might retain their figures and their beautiful appearance might not fade.” – Book of Jasher 2:20

These forbidden arts were taught to them by the fallen angels and we see the same things happening today with birth control pills and genetic mixing of seeds and animals.

“They taught men “the mixture of animals of one species with the other, in order therewith to provoke the Lord: and God saw the whole earth and it was corrupt, for all flesh had corrupted its ways on earth, all men and animals.” Book of Jasher 4:18

We should not be surprised when these things again begin to happen in our day. Genesis reveals –

“There were giants on the earth in those days, and also afterward, when the sons of God came in to the daughters of men and they bore children to them.” – Gen. 6:4

The doctrine of humanism, which is the foundation of modern education, has inoculated most against the belief in a supernatural God but, strangely enough also opens us to belief in aliens, UFO’s, and super heroes. Humanism, which teaches that man is all there is, also opens the door to the supernatural as reasonable people soon learn man does not have all the answers to life.

Men are now genetically modifying seeds, animals, and even humans just as they did in Noah’s day. DARPA (The Defense Advanced Research Projects Agency) even now is modifying soldiers to make them super human.

“The research that has been conducted so far looks promising. It suggests that DARPA’s so-called super soldiers could one day even grow new limbs they have lost in combat, which is something that has been tested already on mice.

As for the part of the brain that is responsible for empathy and mercy, scientists have found that it can be effectively shut off using gene therapy. This would essentially create a soldier who is oblivious to fear, fatigue and emotions.”

Even the government is now admitting there are UFOs in our universe and that the remains of Nephilim (giants) have been found. Of course, what they don’t tell us is these inhuman entities are not humans but demons. Enoch tells us that the pre-flood giants were doomed to roam the earth as evil spirits (demons) –

“And now, the giants, who are produced from the spirits (fallen angels) and the flesh, shall be called evil spirits on the earth.” Book of Enoch 15:8

Prospective parents are now designing their babies to have blue eyes or blond hair.

As we witness the increase of movies steeped in the occult and superhuman entities, and man’s dabbling in genetic modification, and science melding robotics with humans, we would do well to study once again what God has to say about Noah’s day and what caused Him to condemn those generations to destruction.

God created the earth, animals, and humans according to certain parameters and any modification of those parameters will bring results that are bad for us.

So, when they tell you, “It’s just a mask” or “It’s just a vaccination”, beware. It is much more than that! It is preparation to control you and prepare you for the Antichrist. We are living in the end-days when all these things are coming upon us. How do I know? I read the Bible! All the truth is written there but, you have to sometimes search for it. Remember –

and remember, if you are a Christian, Jesus “has made us to be unto our God kings and priests and we shall reign on the earth.” (Rev. 5:10)