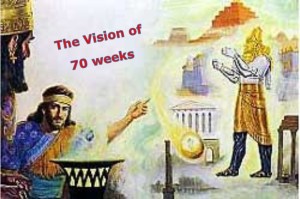 God has revealed His plans for man’s history in many places in the Bible and this is one of them. He has given to us the privilege of searching them out.

I would remind you that the New Testament often refers to believers as ‘kings and priests’, so it is our responsibility to search out the hidden wisdom God has left for us in His Scriptures.

The prophet Daniel was given visions that explain God’s plans for Israel and the nations of the world. None are more fascinating than his vision of The 70 weeks. In this revelation, given to Daniel by the angel Gabriel, the term ‘seventy weeks’ is literally ‘seventy sevens’ , and refers to 490 prophetic years (70 x 7 = 490). Note: Throughout the Bible a prophetic year is a 360 day year which will be referred to later in this article.

Seventy weeks (seventy sevens) are determined upon thy people and upon thy holy city, to finish the transgression, and to make an end of sins, and to make reconciliation for iniquity, and to bring in everlasting righteousness, and to seal up the vision and prophecy, and to anoint the most Holy. Know therefore and understand, that from the going forth of the commandment to restore and to build Jerusalem unto the Messiah the Prince shall be seven weeks, and threescore and two weeks: the street shall be built again, and the wall, even in troublous times. And after threescore and two weeks shall Messiah be cut off, but not for himself: and the people of the prince that shall come shall destroy the city and the sanctuary; and the end thereof shall be with a flood, and unto the end of the war desolations are determined. And he shall confirm the covenant with many for one week: and in the midst of the week he shall cause the sacrifice and the oblation to cease, and for the overspreading of abominations he shall make it desolate, even until the consummation, and that determined shall be poured upon the desolate (or desolator). – Daniel 9:24-27

This prophesy is divided into three parts; 1) seven weeks, 2) threescore and two weeks, 3) the 70th week. But before continuing, we need to understand the 6-fold purpose of this prophesy:

1. To finish the transgression
2. To make an end of sins
3. To cover iniquity
4. To bring the righteousness of the ages
5. To seal up the vision and prophesy
6. To anoint the most Holy

In other words, this prophesy will see the coming of Messiah which “takes away the sins of the world”, brings restoration and forgiveness to both Israel and Gentiles, establishes the Messianic kingdom of God on earth, fulfills all the visions and prophesies God has given to man, and I think the last one talks about the rebuilding of the Temple in Jerusalem which is the only place God has set His Name.

We are told this prophesy will begin its countdown when the command is given to restore and rebuild Jerusalem. This command was issued by the Persian King Artaxerxes and is found in the 2nd chapter of Nehemiah.

And it came to pass in the month Nisan, in the twentieth year of Artaxerxes the king, …. And a letter unto Asaph the keeper of the king’s forest, that he may give me timber to make beams for the gates of the palace which appertained to the house, and for the wall of the city, and for the house that I shall enter into. And the king granted me, according to the good hand of my God upon me. – Nehemiah 2:1-8

We know from history the exact date of this proclamation – the beginning of the month of Nisan, 445 B.C. or March 14, B.C. 445 on our calendar. With the beginning date established, we are now ready to see how the rest of this prophesy unfolds.

The 1st division of the ‘seventy weeks’ is a 7 weeks interval, or 49 years, in which the ‘street and the wall shall be built again even in troublous times’. This phase speaks about the first rebuilding of Jerusalem. Reading the Book of Nehemiah testifies to the truth of this account.

From that day on, half of my men did the work, while the other half were equipped with spears, shields, bows and armor. The officers posted themselves behind all the people of Judah who were building the wall. Those who carried materials did their work with one hand and held a weapon in the other, and each of the builders wore his sword at his side as he worked. But the man who sounded the trumpet stayed with me. – Nehemiah 4:16-18

They suffered threats and attacks from the non-Jews of the area and from complaints and disunity among themselves. It was indeed a ‘troublous time’.

This will be the first installment of this teaching. The second installment will begin the 2nd division of the prophesy in which Messiah comes as predicted. It is the reason why many modern Jews do not like to credit Daniel with being a prophet of Israel, even though before Messiah came the 1st time Daniel was well respected as a Hebrew prophet.