What will it look like when the Antichrist rules on the earth? This is a question many have asked over the years. I can answer it in two words – absolute control. Revelation 13 tells us what it will be like.

“Then he opened his mouth in blasphemy against God, to blaspheme His name, His tabernacle, and those who dwell in heaven.” – Rev. 13:6

He will blaspheme God. What does it mean to blaspheme? it means to utter maliciously false statements, charges, or imputations about. Are we seeing these things now? The answer is yes! Democrats regularly mock God and His followers, the Christians. Hollywood is full of blasphemy. The doctrine of evolution is taught in our schools as if it is fact. But, it denies the creation as God describes it, basically calling God a liar. It leads directly to the gender denial that is presently going on. God created humans as male and female, just two genders but present believers in evolution deny that, claiming there are many genders. In the creation, God defined marriage as a man and a woman joining but, present believers in evolution teach that homosexuality is normal and they actively teach it to our children in our schools. Evolution has led scientists to delve into the human DNA strand and work to modify it. The Chinese have created the first cloned human baby and DARPA (Defense Advanced Research Projects Agency) has been modifying DNA to create super soldiers. Scientist are even growing steaks for your dinner at home by using gene therapy techniques. This is nothing but cannibalism. What Jesus predicted about the end days is coming true right before our eyes – 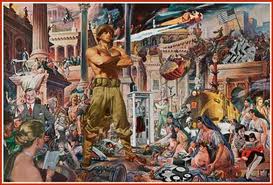 “And as it was in the days of Noah, so it will be also in the days of the Son of Man: They ate, they drank, they married wives, they were given in marriage, until the day that Noah entered the ark, and the flood came and destroyed them all. Likewise as it was also in the days of Lot: They ate, they drank, they bought, they sold, they planted, they built; but on the day that Lot went out of Sodom it rained fire and brimstone from heaven and destroyed them all. Even so will it be in the day when the Son of Man is revealed.” – Luke 17:26-30

In the days of Noah the fallen angels cohabitated with women and produced the Nephilim who were genetic modifications of man. According to the Book of Jasher, they also taught mankind wicked occultist arts so the women could abort their unborn children. The Nephilim filled the earth with wickedness. But the people went on living as if there was nothing wrong! The days of Lot are known for their sodomy (homosexuality) but the people accepted it as normal. It is a pretty accurate description of today as well. And I notice that the Democrats are actively pushing such lifestyles. Allowing two men to marry or two women to marry is blaspheme against God.

Next, Revelation 13 reveals the Antichrist will demand absolute control and worship. He will do this through his cohort the False Prophet.

Some people are already receiving a chip the size of a grain of rice in their hands or foreheads to work at their companies. Several of the vaccines proposed for Covid19 use a “gell” that is like thousands of little computers running around in your body that are able to communicate with centralized 5G servers. The largest company producing such a vaccine is Moderna, backed by Bill Gates and purchased by the Trump Administration for 1.5 billion dollars, uses a Trust Stamp to identify who has received the vaccine.

“Under a partnership between the Bill Gates-supported GAVI vaccine alliance and Mastercard, a new program called Trust Stamp is being tested in West Africa that would use biometrics to verify people’s information.”

“it would not even be necessary for governments to mandate a vaccine to get most people to receive it. Just as many large retailers and grocers now require customers to wear face masks to enter stores, they may likewise require proof of vaccination (verified through technology such as Trust Stamp) just to buy and sell.”

This vaccine will have a world-wide application, plus it uses aborted fetus cells in it’s production. In an article by Epoch Times titled “If Biden Is Elected, Then Expect ‘Obey Authority’ COVID Collectivism” it quoted Biden’s Covid19 expert as saying, “Non-essential businesses should be closed. Restaurant service should be limited to take-out. People should stay home, going out only to get food and medication or to exercise and get fresh air.” When the vaccine becomes available people should be required by law to “be vaccinated “as a condition of employment.”

Couple this with the fact that Bill Gates company is involved in another project – the digital ID project ID2020 Alliance. “Besides Microsoft, the Alliance includes the Rockefeller Foundation, the design studio IDEO.org (with offices in San Francisco and New York), the consulting firm Accenture, and Gavi, the Vaccine Alliance – a company that actively promotes and distributes various vaccines around the world.” It is thought that the vaccines produced will include some sort of microchip that can connect a person to a digital-currency server. By the way the Patent Number for this program is 060606. This sounds very much like the Revelation description of the Antichrist!

I cannot say these things are the Antichrist system but, I can say they are certainly preparing us for such a system, and it isn’t far away. It is time to listen to the words of Jesus, “Repent, for the kingdom of heaven is at hand!”

One thought on “What will the End of the Age Look Like?”